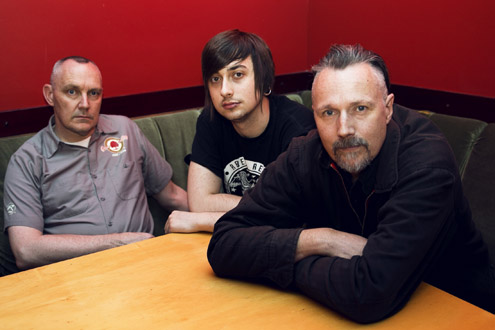 Thirty years into their uncompromising career The Mark Of Cain are showing no signs of losing momentum. Bassist Kim Scott tells Steve Bell that you can teach old war dogs new tricks.

Adelaide power merchants The Mark Of Cain have been laying pretty low since touring their fifth long-player, Songs Of The Third And Fifth, around the country in early 2013. Now they’re returning armed with that album’s third single and a birthday to celebrate to boot.

“This year’s our 30th year, so we contemplated getting out there and doing some celebratory shows,” explains bassist Kim Scott. “We talked about maybe even picking a couple of albums and doing them back-to-back in their entirety – but in the end my work has always been challenging in terms of finding the time, and John [Scott – guitar/vocals] was struggling at the time with family responsibilities and of course [drummer] John Stanier’s availability is always limited because of the other bands he plays in – Battles and Tomahawk are usually either recording or on tour – so getting his time is always a challenge, which is where [temporary drummer] Eli Green fitted in last tour. So we thought we should just have another crack, and we’re really looking forward to getting back into it.”

The rhythm section is integral to The Mark Of Cain’s live power, but Scott claims that having a different drummer doesn’t alter things on stage too substantially.

“Eli’s 22 years old and an incredible talent and it’s just worked really well,” he gushes. “We had to find a drummer who could… not fill the shoes of Stanier because we weren’t looking to replace him, but someone who could execute the songs as tightly and as well. We said, ‘Here’s four or five songs’ to a few drummers we were talking to… Eli turned up and because he’s classically trained and teaches drums himself he transcribed it all into sheet music! We’re sitting there going, ‘What the fuck?’… And he just played everything flawlessly to the point where he was telling us how our parts went!”

And despite routinely strong albums The Mark Of Cain have always been best experienced loud and live.

“When John and I started the band 30 years ago… he always had a firm view of how we wanted to perform,” Scott recalls. “Seeing bands perform live influenced us a lot. For me one of the big turning points was supporting Big Black at Adelaide University… They were visceral in their approach, and we’d had a degree of that from our earlier influences like Joy Division, but it wasn’t until we experienced Big Black that our sonic fell into place. Someone described us once as ‘English melody meets American sonic’, and it’s that American sonic – that intensity and the visceral bass and drums that you feel in the gut – that’s really hard to capture live.”